Organic (synthetic) metals attracted huge attention in the final decades of the last century due to their envisioned futuristic applications at affordable costs. This field was boosted by the early advances in polyacetylene polymers, which exhibited high conductivity upon doping and opened a new route towards organic electronics. However, scientists discovered that dopants compromised the stability of the polymers thus reducing their applications as synthetic metals in real devices.

From a theoretical point of view, early efforts to understand the fundamental processes in the model trans-polyacetyene system resulted in the Su-Shrieffer-Heeger (SSH) model. Such a simple, but ingenious theory, revealed that the resonant form adopted by the polymer, which emanates from the conjugation of pi-electrons (pi-conjugation), can altered the electronic class of the material in an unexpected way. Here, it is worth to point out that topological band theory classify gapped materials by studying mathematically their band structure into trivial (insulators) and non-trivial materials (topological non-trivial insulator). In the SSH model, one resonant form behaves as a normal insulator, whereas the other resonant form one is a topological non-trivial 1D insulator, i.e. a gapped material featuring in-gap edge states. Thus, a crossover of resonant form can change the topological class of a polymer. But polyacetylene, in any of its resonant forms, is a gapped material. As a result, this polymer can only increase its conductivity by being chemically or electrochemically doped.

Thus, the question arising is: Can we engineer 1D organic intrinsic metals? To answer this query, we need to come back to the roots of topological band theory. Such a theory states that the transition between two gapped materials must proceed through closure of the bandgap, i.e. through a metallic state. Thus, if we could engineer a family of chemical materials in which to tailor the topology of its bands by tuning the chemical structure, it could become feasible to approximate or even locate the material at the topological transition point.

An international team of scientists from of Czech, Spanish and Swiss has designed and experimentally verified the possibility of preparing single-dimensional, carbon-based conductive polymers. As carbon is one of the most abundant elements, new polymer conductors have potentially lower production costs than normal metal conductors, along with greater stability and the opportunity to control their material properties. The joint work of Czech, Spanish and Swiss scientists, which was published this week in the journal Nature Nanotechnology, introduces a novel approach to designing non-metallic conductors, which could be used in solar energy applications, optical technologies or nanoelectronics. The work is so important that the editors of Nature Nanotechnology included a special commentary on the article in their News & Views. 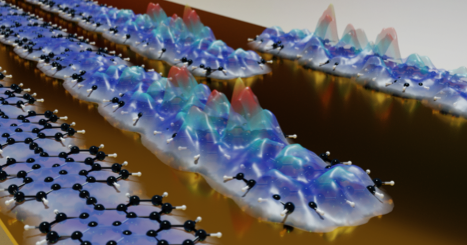